Now is the time to Act 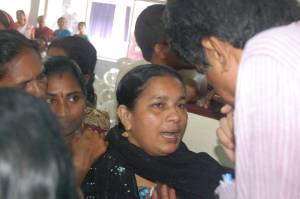 Now is the Time to Act

Dalit and Adivasis and many other landless poor people are asking for a piece of land. In South India, they request 1-2 acres while in North India, 3-5 acres. For them it is a human right, not an act of charity. Many Adivasis have been driven from their land in the recent past; sometimes in the name of forest conservation, other times because of wildlife protection, or because of mining and industrialization.  Naxalism has become a new reason to drive them out from their villages to colonies as well as to prisons. When we bring to the attention of policy makers and planners the issue of displacement and its effect of marginalized communities, instead of working with us to search for a solution, we are being blamed as opposing development in this country. Ironically, some of us have also been accused of being Naxalite supporters.

Even in the most progressive state like Kerala-which is considered to be a model state for land-reforms, Dalits – often the real tiller, were never given land. Land was basically given to the middlemen who were managing the land. Dalit movements in states like Kerala are now identifying this issue clearly. In states like Tamil Nadu and Maharashtra, the land that was meant for Dalits, is being occupied by the powerful sections of the community and by the corporate sector. In Bihar, the acuteness of landlessness among Musahar communities is similar. Landlessness and its problems have developed to such an extent that news such as these are often seen in our newspapers: a) Dalits not having a burial ground b) Dalit families burying their dead inside their kitchens c) Dalits being fined by the panchayat for defecating in the field of a powerful person. These cases are highly symbolic of the desperate situation of the landless.

We brought these issues repeatedly to the notice of the government through discussions, appeals, and agitations. The reality is, however, that the land-holding community is maintaining its power from the village to the national level and strongly resisting any efforts for land re-distribution.

Janadesh 2007 was a success in bringing this issue to the discussion table and led to the creation of a National Land Reform council and the finalization of the Forest Rights Act. Further progress in land distribution has been blocked because the corporate houses are demanding land for their expansion. The Jan Satyagraha March in 2011-2102 is a major effort to put pressure on the government to act.  This cannot happen unless we build pressure from many different sides and angles, uniting the struggles of different people around the country. This will require joint action from the grassroots, intellectuals, from the media, as well as international groups. If each one of us can play our role actively, I am sure we will make progress.

This is an appeal to different groups to design their own strategy to create greater pressure while we are travelling through India and finally walking to Delhi next October with 100,000 people. I think in one year’s time, it is important for us to act together.

This is also a time for middle class Indians to express their solidarity with the struggling masses of India. Having advanced in education, employment and wealth, it is the appropriate time for us to realize that we have a responsibility towards reducing poverty. It is a matter of shame that while we take the benefits of a country called India, millions of our fellow countrymen go hungry and are forced to live an undignified life because of an attitude of indifference. If we do not change our attitude towards dalits, adivasis and the poor, how could we blame them if they conclude that they need to use violence against the middle class? Our position is a non-violent one: we want to bring about a positive change for all our people. We are not trying to take away the good progress that has been made among the middle-class but we are urging them to be peace-loving citizens who are willing to share our benefits with the poor. In fact, there really is no other option–how long can we hold this country together if we continue to perpetuate so much injustice? Indian society needs to wake up to this call and act. Instead of blaming others, let us at least once take the blame on our shoulder and commit to promote the distribution of justice.